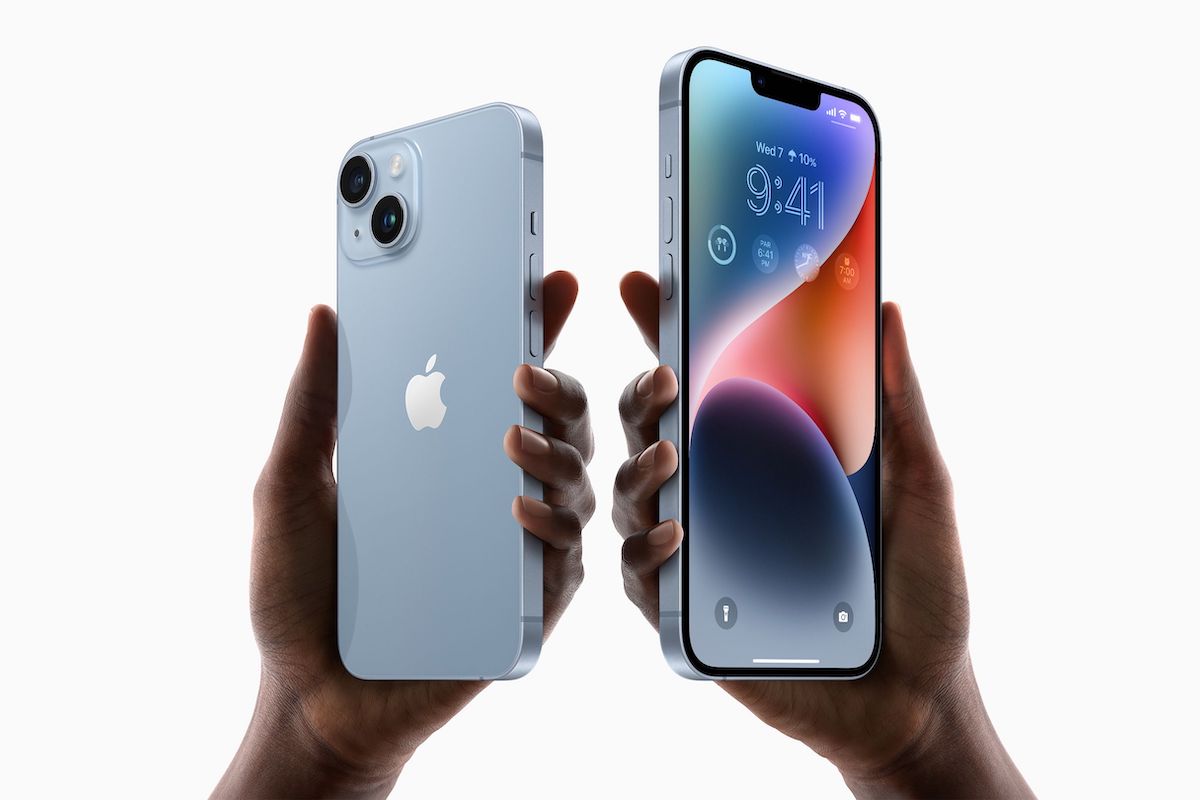 The iPhone 14 and iPhone 14 Plus are the new terminals of the North American firm that come to replace the thirteenth iteration. Although there are no major differences with respect to the previous generation, the price has risen significantly, surpassing the barrier of 1,000 dollar. Leaving aside the absence of news and the increase in its value, what are the differences between the iPhone 14 vs 14 Plus? We have analyzed all its features in a comparison to answer this question.

The design is the same, but not the dimensions

We are not saying anything new when we say that we find a practically traced design. The reason for the Plus model is precisely its screen, which grows to 6.7 inches, that is, about 0.6 inches more than the iPhone 14. What does this imply in its dimensions? well one difference of approximately 30 grams in weight, 0.2 millimeters in thickness, 14.1 in height and just over 7 in width. In other words, the iPhone 14 Plus is much larger and heavier than the standard model, something that can be seen in the image that presides over this article.

And what about the rest of the elements? The differences are non-existent, beyond the increased screen real estate. Both are made of aluminum on the edges and glass on the back, in addition to presenting protection against water and dust thanks to IP68 certification (up to 6 meters deep for a maximum of 30 minutes, according to the company). By having a larger chassis, the sound projected by the Plus model is expected to be slightly more powerful although Apple does not refer to the power of its speakers.

Another detail that is worth mentioning is that the two terminals lack SIM card tray in North American market not so in Europe, where this standard still has only anecdotal acceptance.

No apparent differences on screen

As we have mentioned before, beyond the useful surface, of about 6.1 and 6.7 inches respectively, we do not find technical differences on paper. Both drink from an OLED matrix with resolution similar to Full HD which Apple has called Super Retina XDR, with 460 pixels per inch, True Tone technology and 60 Hz frequency. Also, both are compatible with the HDR and DCI-P3 standard, in addition to offering a contrast ratio of 2,000,000 to 1. The maximum brightness provided by Apple is 800 nits, with a peak brightness level of 1,200while the biometric security method is still based on Face ID.

Neither in the processor nor the memory… A priori

Apple has decided to reuse the processor of the iPhone 13 Pro in its new generation of smartphones. We are talking about the Apple A15 Bionic, which this time has 6 cores and a 5 GPU, with up to 16 Neural Engine cores. Little or nothing is known about RAM, beyond some screenshots provided by those users who have already been able to test both devices. In this case, the estimated amount is 6 GB, although in the past the Plus model used to add an additional couple of gigabytes.

As for storage space, the two terminals are sold in versions of 128, 256 and 512 GB, no versions with up to 1 TB of capacity. The associated connectivity is not far behind either, since they have the latest industry standards: Bluetooth 5.3, WiFi 6, NFC for mobile payments through Apple Pay, Dual GPS… And as a version of the system, we find iOS 16.

Unlike the previous generation, whose Pro and Pro Max models differed slightly from each other, The iPhone 14 and 14 Plus have exactly the same camera pack. We are talking about two 12-megapixel sensors that now improve their aperture to a brighter f/1.5 value, in addition to expanding the physical size of the pixels to 1.9 microns. The camera with an ultra wide-angle lens is exactly the same as that of the iPhone 13, with an f/2.4 focal aperture.

The second improvement introduced by the company is found in the front camera, which despite maintaining the initial resolution (12 megapixels), improves the focal aperture up to a value of f/1.9 compared to the f/2.2 aperture of its predecessors. We can also highlight the inclusion of a new Action mode that allows you to record much more stable videos, in addition to the improvement of the Night mode in the wide angle thanks to the Photonic Engine and the inclusion of a Cinema mode that now allows recording in 4K at 24 FPS already 30.

For the next reason most users opt for the larger model is its battery. Again, the company has not referred to this type of data on its official page, only to the real figures that can be obtained from its autonomy. The figures are as follows:

In any case, some leaks ensure that the iPhone 14 has 3,279 mAh compared to 4,325 mAh of the Plus model, which represents a difference of no less than 31% in favor of the Plus model. Regarding the charging speed, the company promises to complete 50% in just half an hour thanks to the 20 W charger that is not included in the product box and that we will have to purchase separately. Due to the differences in capacity, the iPhone 14 is expected to complete its charge faster. As for wireless charging, both support MagSafe charging up to 15 and Qi charging up to 7.5.

Price, opinion and conclusions, iPhone 14 or iPhone 14 Plus?

After analyzing all the differences between the iPhone 14 Plus vs 14, it’s time to draw conclusions, which as usual, are determined by the price. On Amazon and the official Apple store, the versions with 128 GB of storage are listed for €1,160 and €1,010 respectively. Which is more recommended? It all depends on the aspects that we prioritize; what is a fact is that the size of the iPhone 14 Plus is not suitable for all audiences.

If we opt for the latter, the only advantages over the iPhone 14 are found in the dimensions of its screen and battery life. In case of prioritizing the size, the iPhone 13 Pro is a much more recommended model, especially if we take into account that it is currently sold at a price very similar to the 14: about 1,090 dollar. Not only do we have the same power, but we also have a much more competent photographic section and a screen with 120 Hz refresh rate, in addition to other advantages associated with the Pro variants.

Next Read ⇒ Poco M5 vs Xiaomi Redmi Note 11- Differences, Comparison Which one is better?

iPhone 14 vs 13 Pro – Differences, Comparison Which one is better?

Poco M5 vs Xiaomi Redmi Note 11- Differences, Comparison Which one is better?

Poco M5 vs Poco M4 Pro 5G – Differences, Comparison Which one is better?