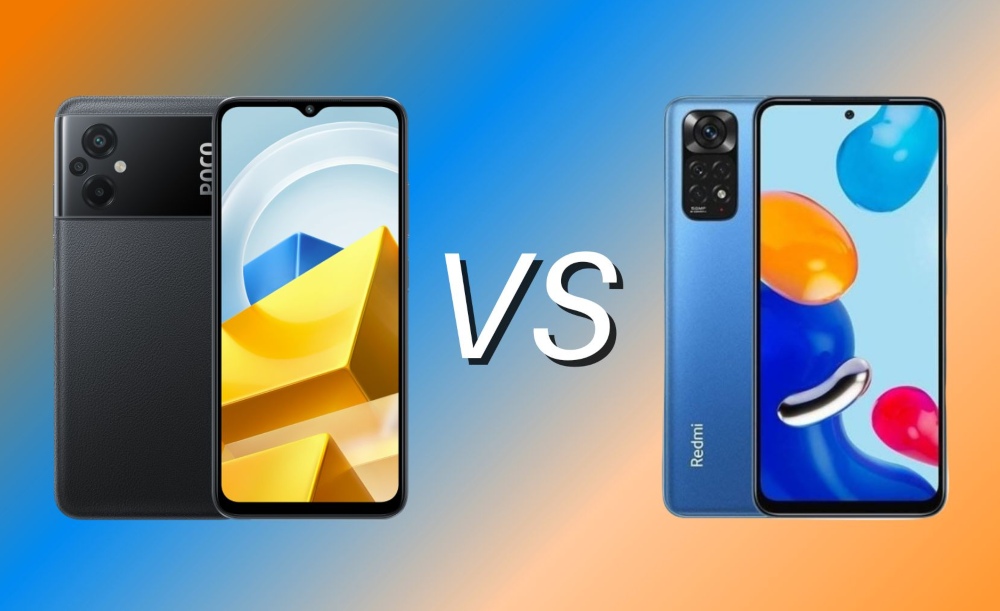 After its recent launch, The Poco M5 has become one of the most interesting options among quality-price mid-range mobiles. This makes it a direct rival to the Xiaomi Redmi Note 11, another device that is in the same range and has really competitive features for the price at which it is sold. Therefore, to determine which of the two phones is better and why, we now compare them in depth, based on their main technical specifications and prices.

Two phones that look nothing alike and have similar screens, but with important differences

The first thing that can be noticed with the naked eye is the difference in terms of designs between the Poco M4 and Xiaomi Redmi Note 11, since both bet on different islands for the front camera sensor. This leaves us with a “V” shaped notch on the former and a hole in the screen on the latter. Likewise, the other aspect by which both mobiles differ greatly is the rear camera module, which in the Poco M5 extends across the upper back of the phone and in the Xiaomi Redmi Note 11 it is located in a small rectangular island in the upper left of it, with a different organization of sensors.

Another notable difference between both devices is related to weight, with 22 grams in favor of the Redmi Note 11 for being lighter. And, in terms of dimensions, it’s also slightly smaller and slimmer.

Regarding the screens, the one found in the Poco M5 has a diagonal of 6.58 inches, is IPS LCD technology, has a FullHD + resolution of 2,408 x 1,080 pixels and has a refresh rate of 90 Hz. The Xiaomi Redmi Note 11, on the other hand, is smaller, with a size of 6.43 inches. Also, this is AMOLED and its resolution, although it is FullHD + too, is 2,400 x 1,080 pixels. In addition, it also boasts a refresh rate of 90 Hz. In the rest, both screens are protected by Corning Gorilla Glass 3, which resists bumps, scratches, falls and all kinds of abuse.

The performance of the Poco M5 is under the responsibility of the processor chipset Helio G99 de Mediatek a piece of 6 nanometers and eight cores that work at a maximum clock frequency of 2.2 GHz. The RAM memory that is available in this device, in addition, is 4 or 6 GB, while the internal storage space is 64 or 128 GB of type UFS 2.2 and can be expanded via a microSD card.

For its part, The Xiaomi Redmi Note 11 has a Qualcomm processor. In question, it makes use of the Snapdragon 680, which also has a node size of 6 nanometers and, despite boasting an octa-core configuration at a higher clock frequency of 2.4 GHz max., offers a lower performance than the aforementioned Helio G99 of the Poco M5. To this we must add that it also comes with a 4 or 6 GB RAM memory and an internal storage space of 64 or 128 that is also of the UFS 2.2 type and supports memory expansion through a microSD card.

50 megapixel cameras for both devices

One of the things that the Poco M5 and Xiaomi Redmi Note 11 share is a 50-megapixel main camera sensor at the rear. This has an f/1.8 aperture, PDAF autofocus and video recording capacity in FullHD resolution at 30 frames per second.

In the case of the Xiaomi Redmi Note 11, since there is a configuration of four cameras in total, the other three sensors that accompany the main 50-megapixel sensor are an 8 megapixel wide angle with f / 2.2 aperture and another two 2-megapixel ones with f/2.4 aperture for macro photos and field blur effect.

On the other hand, regarding selfie photos, the front sensor found in the Poco M5’s display notch is a 5-megapixel one with f/2.2 aperture. The Redmi Note 11, on the other hand, is 13 megapixels with f / 2.4 aperture. With both selfie triggers, videos can be recorded in FullHD at 1080p at 30 frames per second.

Batteries and other features

The battery that lives inside the Poco M5 has a capacity of 5,000 mAh and is compatible with fast charging of 18 W through a USB type C input. Instead, that of the Xiaomi Redmi Note 11, which is also 5,000 mAh, supports 33 W fast charging technology which is capable of charging it from empty to full in less than an hour, while the 18 W of the Poco M5 takes about an hour and a half to complete a charge.

As for other features and technical specifications, both have a side-mounted fingerprint reader for biometric unlocking, but only the Redmi Note 11 comes with IP53-grade splash resistance and stereo speakers. In turn, as far as connectivity is concerned, both come with 4G LTE, dual-band Wi-Fi 802.11 a/b/g/n/ac, GPS with A-GPS, NFC for contactless mobile payments and Bluetooth, which in the case of the Poco M5 is version 5.3 and in the case of the Xiaomi phone, 5.0. Both also have FM radio, a 3.5mm headphone jack, and an infrared sensor for controlling external home devices like smart TVs and air conditioners.

For the rest, both come with the Android 12 operating system under the MIUI 13 customization layer and are upgradable to Android 13.

Prices, conclusions and opinion: which is better and why, the Poco M5 or Xiaomi Redmi Note 11?

The Poco M5 has been recently launched and has an official price that starts at 190 dollar for the 4 GB version of RAM with 64 GB of internal storage space. In the meantime, the Xiaomi Redmi Note 11 was launched with a regular price of about 200 dollar  but today you can get it for about 180 dollar and even less, depending on the current offer, since this device has been on the market for much longer since it was launched earlier this year.

Now, with respect to which of the two mid-range is better and why, the Poco M5 is superior, although not in all sections, such as cameras and battery. And it is that this phone does not come with a wide-angle lens and has a fast charging speed lower than that of the Redmi Note 11. In the rest, it has better features, since it has a slightly larger screen, a processor chipset that offers a plus considerable in terms of performance, power and fluidity, and, regarding connectivity, it has a newer and more advanced version of Bluetooth.

For its part, the Xiaomi Redmi Note 11 has some advantages to consider, as is IP53-rated splash resistance, dual speakers, and lighter weight. Also, although its screen is smaller, it boasts of AMOLED technology, which is superior to the IPS LCD panel of the Poco M5 and makes it a better option for viewing content with purer blacks and more vibrant colors.

Next Read ⇒ iPhone 14 vs iPhone 12 – Differences, Comparison Which one is better?

iPhone 14 vs 13 Pro – Differences, Comparison Which one is better?

iPhone 14 vs 14 Plus – Differences, Comparison Which one is better?

Poco M5 vs Poco M4 Pro 5G – Differences, Comparison Which one is better?