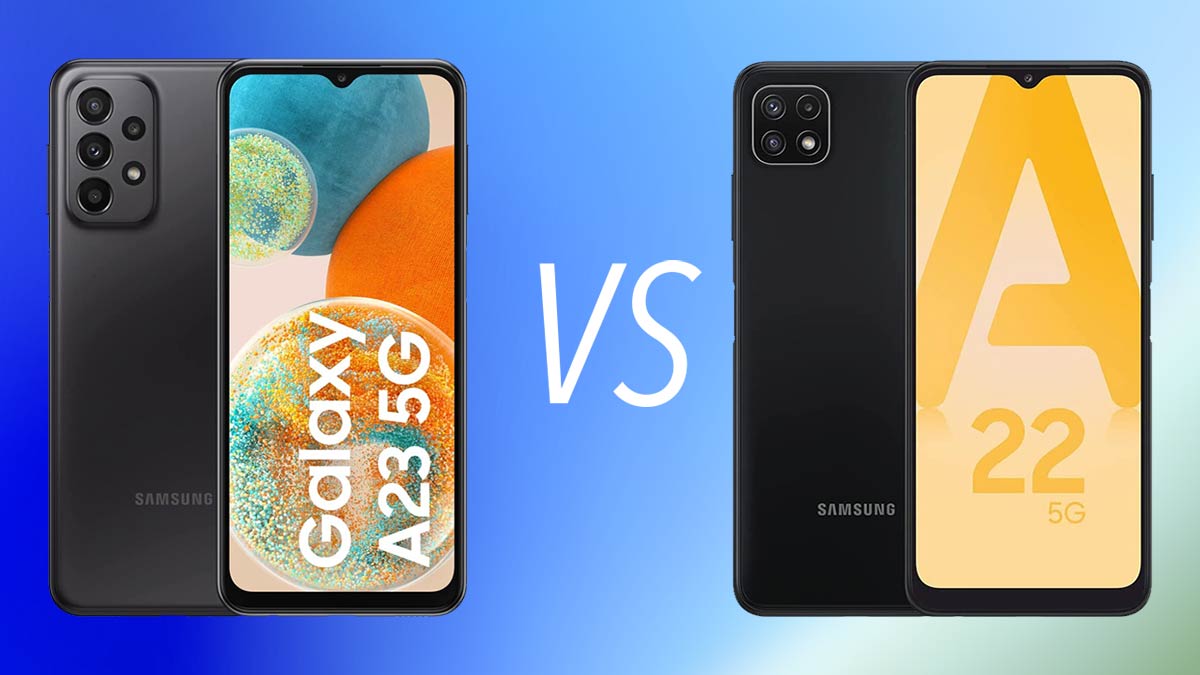 A few weeks ago, Samsung presented the new Galaxy A23 5G to the public, which arrives as a direct successor to the A22 5G presented in the media of 2021. Beyond the news that is presented inside, the new iteration has served the company to adapt the aesthetic section to the new Samsung design lines. All this with a price increase that places it in a range closer to the average than to the access range. Starting from this premise, What are the differences between the Samsung Galaxy A23 5G vs A22 5G? We see it below.

Design: they start from the same base, but the Galaxy A23 5G is more modern

Having launched the device a year later is not only appreciated in the price, but also in the visual section. And it is that despite the fact that the two start from a similar idea, the Galaxy A23 5G has a much more used front, which allows it to reduce its dimensions despite the fact that both have a 6.6-inch diagonal screen. . If we look at the physical size of the two devices, the new generation arrives with a chassis that is 0.6 millimeters thinner, 2.2 millimeters lower and 6 grams lighter.

Leaving aside that the construction of the two terminals is based entirely on polycarbonate, the back of the A22 5G has more rounded lines, as well as a less prominent camera module. As for the rest of the elements, the truth is that the two share most of the characteristics, such as the location of the fingerprint sensor, which rests on the Power button, the presence of a 3.5-millimeter port for headphones or the dual tray for nano SIM cards. The Galaxy A22 5G is known to have two Dolby Atmos compatible stereo speakers so the same compatibility is expected in the A23 5G.

The screen is based on the same matrix, but it is faster in the new generation

Samsung does not usually give many details about the technical specifications of the screen; the Samsung Galaxy A23 5G was not going to be an exception. For now, we know that the phone is based on the same matrix as its predecessor, with a 6.6-inch panel with TFT LCD technology, Full HD+ resolution and 20:9 format. Regarding the refresh rate, the screen doubles the figure of last year’s model, with 120 Hz frequency to improve the speed of interaction.

Little or nothing is known about the rest of the specifications, such as the maximum brightness level, the contrast ratio or the color calibration, although again, no major differences are expected.

Power and performance: the fight between Qualcomm and MediaTek continues

Beyond the visual differences, what surely justifies the renewal of the range is the processor, since the Samsung A23 5G has one of the most solvent Qualcomm chips in the mid-range, the Snapdragon 695 5G. Compared to the MediaTek Dimensity 700 in the Samsung A22 5G, the processing power exceeds by more than 20% the results obtained by the second according to various tests carried out in Antutu. What does not change are the available storage versions (64 and 128 GB) and RAM, which is once again based on a single variant with 4G. Unfortunately, the standard used in the memories is unknown, so we cannot assess the speed of reading and writing.

And what about connectivity? The only difference is found in the Bluetooth version, which in the new version is based on the 5.1 standard versus the 5.0 iteration of the A22 5G. The rest of the connections are, in essence, the same: 5G SA and NSA, dual-band WiFi, NFC for mobile payments… Of course, due to the launch date that separates them, the version of Android in the two terminals is based on Android 12 and 11 respectively, that is, in One UI 4.1 and 3.1. This could translate to more sustained support in the future on the Galaxy A23 5G.

Photographic section: the presence of OIS can make a difference

Samsung has decided to provide its entire mid-range with a characteristic more typical of the high-end. We are talking about optical stabilization, a system that promises significant improvements in video recording and when taking pictures in low light environments. If we limit ourselves to citing the technical specifications of the Galaxy A23 5G, we find a camera configuration made up of four 50, 5, 2 and 2 megapixel sensors with wide-angle, macro lenses and a third sensor for Portrait mode. For its part, last year’s model bets on three 48, 5 and 2 megapixel sensors with a wide-angle lens and the second destined again for Portrait mode.

Regarding the front camera, in both cases we find an 8-megapixel sensor, although the focal aperture of the Galaxy A22 5G is wider, which should affect the dynamic range and brightness of the lens at night. Another detail worth mentioning is that the compatibility of this year’s model with the GCam should be more successful since the processors manufactured by Qualcomm are usually easier to adapt in the face of modifying the Google Pixel camera application.

Another proof that Samsung has replicated the idea of ​​​​the Galaxy A22 5G is that we find the same battery capacity in the new generation, with 5,000 mAh that provides up to two days of real use. The most important difference between the two terminals, if we put aside the resounding absence of the charger in the product box, is the fast charging technology, that reaches 25 W of power in the Samsung A23 5G compared to 15 W of the initial model.

This represents an increase of 66 W, which could translate into a around 50% faster charging time when taking into account the loss of energy generated in the form of heat.

Price, conclusion and opinions, Samsung Galaxy A22 5G or A23 5G?

After analyzing the main differences between the Samsung Galaxy A22 5G vs A23 5G, it is time to draw conclusions, which, as usual, are determined by the price. At the time of writing these lines, the Samsung Galaxy A22 5G is sold on Amazon at a minimum price of 228 dollar compared to 280 for which the A23 is sold. Curiously, the Galaxy A33 5G is sold for only 258 dollar so opting for a superior model is much more recommended.

This model not only offers a more complete photographic section, but also a more powerful processor, a higher quality AMOLED screen and a more successful construction. Since it belongs to a higher range, it is expected to hold up better over time both from the point of view of specifications and software support through updates.

Next, Read ⇒ Xiaomi 12T vs 12T Pro – Differences, Comparison Which one is better?