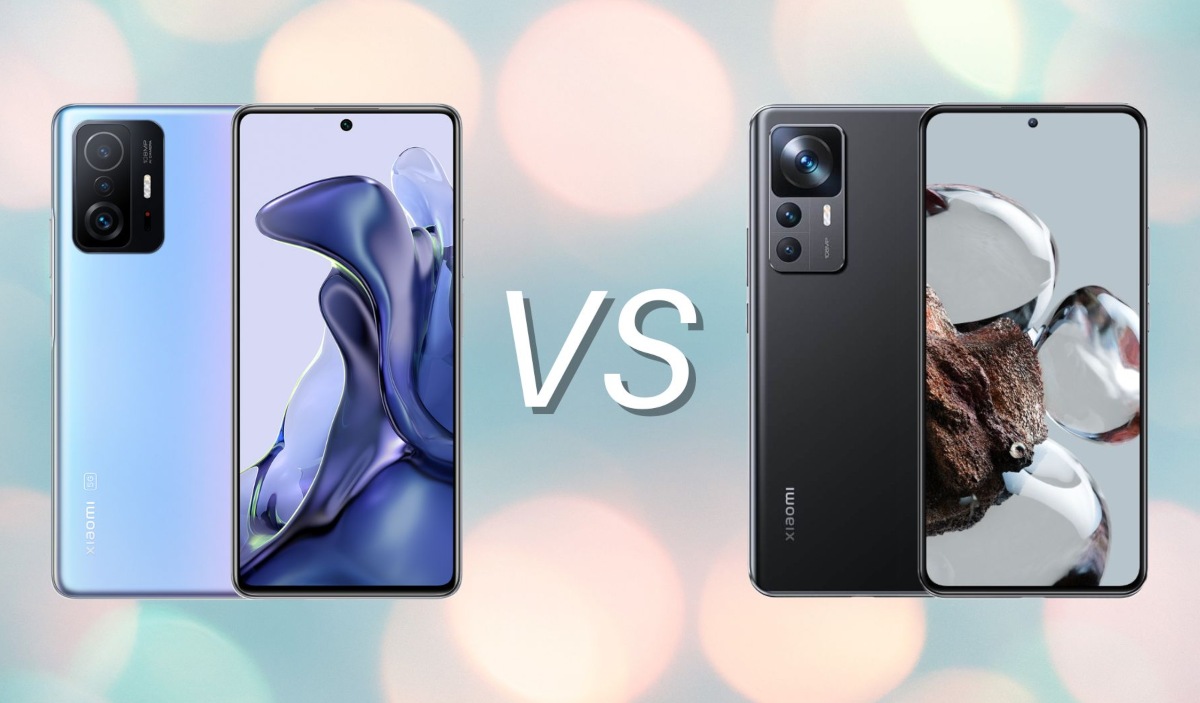 Xiaomi has re-introduced a new mobile, one that arrives as the direct successor to the Xiaomi 11T. This is the Xiaomi 12T, an excellent value for money phone that comes with some important new features, but also shares many of the features and specifications of the aforementioned 11T. Therefore, below we put them face to face in this comparative analysis, in order to determine which of both mobiles is better and why based on their prices and everything they have to offer.

The Xiaomi 11T is a phone that at first glance is striking for having an aspect premium. This is thanks to the fact that it presents a glass finish on the back, with edges made of aluminum that give a feeling of quality in hand. Its design also features a rear camera module with a lot of personality and a screen with a hole for the selfie camera.

For its part, the Xiaomi 12T is a mobile that, although it is also quite premium in sight, has chosen a design similar to that of the Xiaomi 12 and that of its older brother, the 12T Pro. For the rest, it also has a glass back cover, although not as bright as the 11T, being more of a matte type, with edges made of aluminum. In turn, as can be seen in the images, this device also has a screen with a hole for the front camera and thin and symmetrical frames that hold it.

Regarding the screens, that of the Xiaomi 11T is of AMOLED technology and has a diagonal of 6.67 inches. In addition, it presents a FullHD + resolution of 20: 9 and has a high refresh rate of 120 Hz. It also supports the HDR10 + standard for a better display of multimedia content and is protected by Corning Gorilla Glass Victus.

The Xiaomi 12T also has a 6.67-inch AMOLED screen with a 120 Hz refresh rate, in addition to also being compatible with HDR10 +. However, the FullHD + resolution that it boasts is somewhat higher, 2,712 x 1,220 pixels, and the glass that protects it is a Corning Gorilla Glass 5one less advanced than the Victus of 11T.

Mediatek is the semiconductor manufacturer that has provided the Xiaomi 11T and 12T with two of its best mid-high-end processor chipsets of the moment. The first comes with the Dimension 1200a piece that is built with a 6-nanometer manufacturing process and is capable of working at a maximum clock frequency of 3.0 GHz thanks to its octa-core configuration.

The processor that lives inside the Xiaomi 12T, on the other hand, is an even more advanced one, so it offers higher and more reliable performance when it comes to opening and running heavy applications and demanding graphics games. In question, we talk about Dimensity 8100 Ultra, one of the newest from Mediatek. This model has a node size of 5 nanometers and eight cores that can run at a maximum of 2.85 GHz.

The RAM of both is 8 GB. The two also have 128 and 256 GB ROM (internal memory) options, which are of the UFS 3.1 type, so they both boast high read and write speeds, which also helps the performance of both. be the top. Of course, none have an input or slot for internal storage expansion through the use of a microSD card.

A 108-megapixel main sensor is what the Xiaomi 11T has as the protagonist in its rear camera module. This lens also has an f/1.8 aperture and It is capable of recording video in 4K resolution at 30 frames per second with electronic image stabilization (EIS). The other two sensors that are coupled in this phone’s triple photo setup are an 8-megapixel wide-angle with f/2.2 aperture and a 5-megapixel telephoto lens with f/2.4 aperture that doubles as a macro, which is why it’s Also known as “telemacro”.

The Xiaomi 12T also has a 108-megapixel main rear camera with f / 1.8 aperture, but this one has optical image stabilization (OIS), so the videos in 4K at 30 frames per second recorded with this mobile come out better stabilized than those that are recorded with the Xiaomi 11T, by reducing vibrations as much as possible when take the shots. There’s also an 8-megapixel wide-angle lens with f/2.2 aperture and a 2-megapixel macro lens with f/2.4 aperture.

Regarding the selfie camera of the Xiaomi 11T, it has a 16-megapixel resolution and has an f/2.5 aperture. In addition, you can record video in FullHD 1080p at 30 frames per second. The Xiaomi 12T, on the other hand, is 20 megapixels has an f/2.2 aperture and is capable of taking videos in FullHD 1080p at 60 frames per second, so the one on this phone is better than the one on the 11T.

Batteries and other features

The battery of the Xiaomi 11T has a very good autonomy because its capacity is 5,000 mAh. In addition to this, it is compatible with 67 W fast charging technology, which promises a full charge in about 40 minutes through a USB type C input. In turn, the Xiaomi 12T also features a 5,000 mAh battery, with the difference that it supports 120 W fast charging; In this way, you can get a charge from 0% to 100% in just 19 minutes, also through a USB type C input. It is also worth noting that both devices come with their respective charger in the box.

Other features of both phones include 5G connectivity, Wi-Fi 802.11 a/b/g/n/ac/6 dual-band, NFC for contactless payments, GPS with A-GPS and an infrared sensor for remote control. of household devices (air conditioners, smart TVs…). They also have Bluetooth, but the Xiaomi 11T is version 5.2 and the 12T is version 5.3.

Prices, conclusions and opinion: which is better, the Xiaomi 11T or Xiaomi 12T?

Currently, the Xiaomi 11T can be obtained for sale with a starting price of around 400 dollar for the 8 GB RAM variant with 128 GB internal memory. The Xiaomi 12T, for its part, has a considerably higher price, which is about 600 dollar starting for the 8 GB RAM model with 128 GB storage. This leaves us with a not insignificant price difference of about 200 dollar between one mobile and the other.

Now, which mobile is better and why? The answer to this question is broken down into parts, to finally give a conclusion. And it is that, to begin with, If we talk about screens, the Xiaomi 12T is better, but only for the fact of having a slightly higher FullHD + resolution. However, the Xiaomi 11T has a more resistant protective glass, the Corning Gorilla Glass Victus.

In terms of performance, the Xiaomi 12T is indeed a better option, and by far, thanks to the Dimensity 8100 Ultra chipset inside it. Yeah, when it comes to cameras, the rear photographic module of the Xiaomi 11T is better in general terms, for the simple fact of having a 5-megapixel “telemacro”, but the main 108-megapixel sensor that this device has does not have OIS, something that the Xiaomi 12T does boast. Also, the 12T’s selfie camera is better than the 11T’s, being higher resolution and having a larger focal aperture. Otherwise, the 12T also has an in-display fingerprint sensor, unlike the 11T, which has it on the side, and it also has a 120W fast-charging battery.

Based on what has been said, the Xiaomi 12T is better than the 11T. Therefore, it is also the winner of this comparison. However, it is 200 dollar more expensive than the 11T, and the improvements it has in terms of features and technical specifications may not compensate for the huge price difference between the two terminals.

Next, Read ⇒ Xiaomi 12T vs 12 – Differences, Comparison Which one is better?