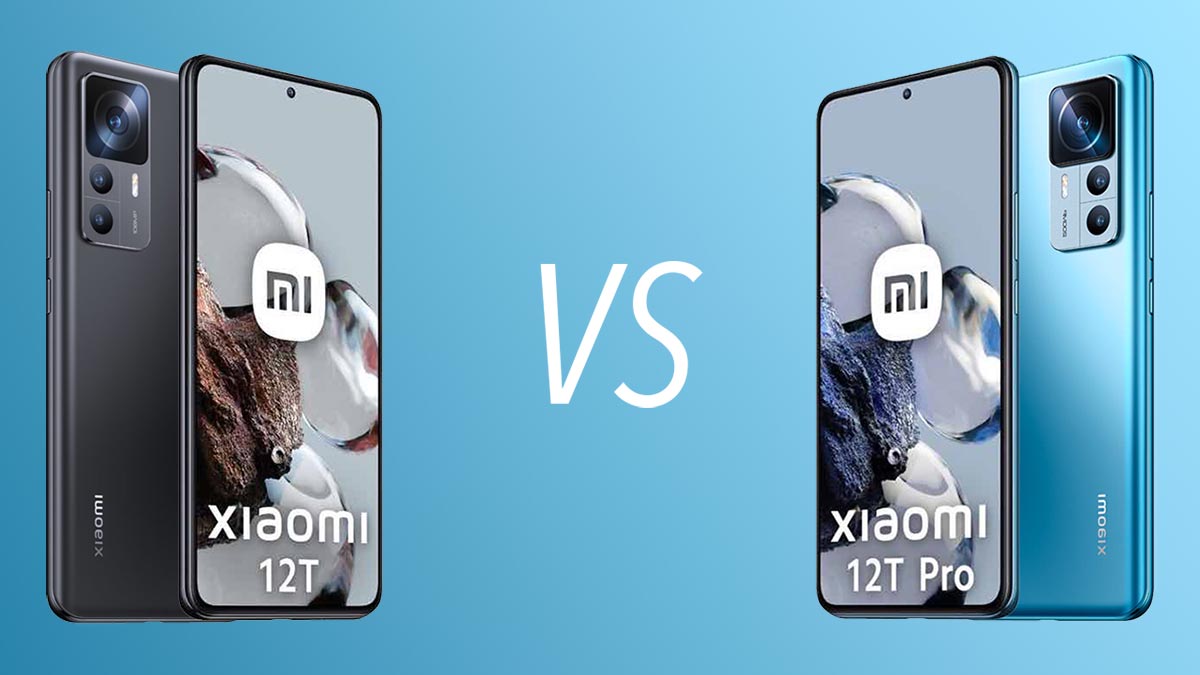 The new Xiaomi 12T series is already a reality after almost a year of leaks of all kinds. On this occasion, the manufacturer has taken the Xiaomi 12 and 12 Pro as a base, something that can not only be seen in the design of the terminals, but also in their specifications. Leaving aside the brand’s flagship pair, the truth is that the Xiaomi 12T and the 12T Pro do not have many differences between them. But, what is the reason for this differentiation between ranges and, above all, between prices? We have analyzed all the differences of the Xiaomi 12T vs Xiaomi 12T Pro in a comparison of features to answer this question.

When we say that the differences between the Xiaomi 12T Pro vs 12T are not very big, we are referring above all to the aesthetic section. Both have a practically traced chassis, with identical color availability and dimensions that do not vary one iota from one model to another: 163.1 millimeters in height, 75.9 in width and 8.6 in thickness. Not even the weight that only differs 3 grams probably because of the camera of the Pro model, which is 200 megapixels and has a larger sensor size.

For the rest, both are made of metal and glass, in addition to having Corning Gorilla Glass 5 protection on their screens. The dual speaker arrangement is the same, although in the case of the Xiaomi 12T Pro, they have the signature of Harman Kardon. The good news is that both are compatible with Dolby Atmos. Of course, both lack protection against water or dust, as could be understood by the price range in which they are found.

The screen is practically identical, except for a single detail

That’s how it is. If we take a look at its specifications, we find a practically identical technical sheet: 6.67 inches, Full HD + resolution, 120 Hz with variable frequency in four phases (30, 60, 90 and 120 Hz), touch sampling rate of 480 Hz and 500 nits of maximum brightness, with a peak brightness level of up to 900 nits. So what differentiates them from each other? Dolby Vision certification which is available in the Pro variant. For its part, the Xiaomi 12T is only compatible with HDR10 + certification.

Another difference that the two terminals could keep from each other, in the absence of official confirmation from the company, is related to the fingerprint sensor. Some rumors claim that the Pro variant has a sensor under the screen, while the cheaper variant could opt for an optical sensor located on the Power button. We will update this information as soon as the official technical sheet is accessible.

The most powerful of Mediatek and Qualcomm

It’s time to talk about specifications. Inside the two devices, we find the most powerful of Mediatek and Qualcomm and MediaTek to date. We talk about Mediatek Dimensity 8100 Ultra, which debuts on the market with the Xiaomi 12T, and the first generation Snapdragon 8+. Taking into account the launch date of the Mediatek chip, there are still no records available to know the differences in power, but everything points to which hands will be on par. What we do know is that the first is manufactured in 5 nanometers and the second in 4, so energy efficiency should be more successful in the Qualcomm model.

As far as memory is concerned, both are available in variants with 128 and 256 GB of internal storage, in addition to 8 GB of RAM as a base figure and an additional variant with 12 GB in the Xiaomi 12T Pro. As expected. , the available memory technologies operate on the latest standards, that is, UFS 3.1 and LPDDR5. The same happens with connectivity, since we find the latest connections on the market: WiFi 6, 5G, NFC for mobile payments, Dual GPS, Bluetooth 5.3 and so on. On the other hand, Android 12 under MIUI 13 is the version that operates on both terminals.

Xiaomi has decided to enhance the photographic section of its new series with high resolution sensors, although the Xiaomi 12T has a configuration practically traced to that of its predecessor model, with three sensors on the back of 108, 8 and 2 megapixels with macro and wide-angle lenses. The Pro model, however, bets on a 200-megapixel main sensor signed by Samsung, the ISOCELL HP1, which, in addition to having optical stabilization, is capable of recording video in 8K resolution. It is also capable of recording video in the HDR10 + standard, in addition to offering a two-fold optical crop zoom and ProFocus and ProCut technologies.

And what about the remaining two sensors? In this case, they are the same as those of the standard version: 8 and 2 megapixels with wide angle and macro lenses. If we focus on the front camera, the same bet remains in force in the two terminals, since we find a 20 megapixel sensor with an f/2.2 focal aperture.

Battery and charging: no difference on paper

Same chassis, same battery space and relevant charging technologies. In both cases, the battery capacity is 5,000 mAh, with a 120 W fast charging system which promises to complete a cycle in less than 20 minutes. Does this mean that the autonomous is identical between the two terminals? Nothing is further from reality, since as we have mentioned before, the energy efficiency of the processor could play in favor of the Pro variant. In any case, the differences should be insignificant, at least on paper.

After analyzing all the differences between the Xiaomi 12T vs 12T Pro, it is time to draw conclusions, which are determined, in part, by the price, which in this case starts from 600 and 750 dollar respectively. The question is this: is it worth paying 150 dollar for the most expensive model? Depends.

If we limit ourselves to citing the differences with respect to the standard version, the truth is that its surcharge does not justify aspects such as the photographic section or the choice of processor. And if we prioritize these aspects, there are more complete solutions on the market from Samsung and Apple at a similar price. It can be the case of the iPhone 13 or the Samsung Galaxy S22 which are already sufficiently undervalued to compare with their price.

Next, Read ⇒ Xiaomi 11T vs 12T- Differences, Comparison Which one is better?